This walk leaves Okehampton, passing remains of medieval longhouses and the Deer Park hunting lodge. Descending back to Okehampton, the walk joins the West Devon Way, passing through Old Town Park Local Nature Reserve, and close to Okehampton Castle, which makes a very worthwhile diversion. The route crosses a variety of terrain, including green lanes, fields and woodland tracks. The surface is often uneven, and can be wet and muddy, particularly after prolonged rain. There is a fairly steep climb from Okehampton near the start of the walk, and at the end, and a steady descent in the middle of the walk.

1. The route starts from the car park at the Okehampton YHA and the Countryside Information Point. Walk down the road under the bridge. The railway station was originally built in the 1870s. Passenger services ceased in 1972 but the station was renovated in 1997. The YHA is located in a former goods shed, dating back to the station’s earliest days.

2. Turn left along the bridleway opposite the main entrance to the railway station forecourt.

3. At the far end turn left and follow the road over the railway and the A30. The A30 Okehampton bypass was built between 1985 and 1988 after a lengthy planning debate about the best route.

4. Immediately after the roadbridge, take the footpath down the lane to the right. Follow this as it bends left and then right leaving the lane to a stile and gate.

5. Cross the stile and follow the footpath straight ahead.

6. When the main track bears left to a cottage, keep to the often wet grassy path ahead. Go through the gate at the top. You will see some earthworks a little way up the slope to the left immediately after the gate. This site seems to be the location of the medieval Deer Park hunting lodge. In a hollow some 50m from the fence can be seen the remains of a door arch and small arched window. The site is believed to have been used later as a leper hospital, probably because of its remoteness from the town. Return to the path alongside the fence at the bottom.

7. Continue next to the fence ahead until reaching a ladder stile on the right over a stone wall. This area is within the heart of the Deer Park. Shortly after 1300, the newly-created Earl of Devon, Hugh Courtenay, created the 1700-acre park, based on and to the south of the castle. The park was returned to agriculture after being ‘dis-parked’ by Henry VIII in 1538. Cross the stile, then follow the footpath downhill, next to the fence line and low wall.

8. Continue to the bottom and at the fence by the A30 follow the path left through the gate and on alongside the fence. Cross the stream.

10. To continue on the main route, after the underpass, go through the gate ahead, heading straight across the field. At the fence turn right onto the bridlepath (this is part of the West Devon Way walking route).

11. Go through a metal gate, crossing a stream, then Taking care as you proceed, follow the signs across the golf course, picking up the clear path as you descend to the surfaced bridleway. Okehampton Golf Course was opened in 1913 – beware of flying golf balls, and please be respectful of golfers.

12. Keep to the track as it becomes more distinct, then at the end continue ahead on the surfaced road.

13. Some 300m along the road, take a footpath on your left descending through the woods signed the West Devon Way.

14. These woods form part of the Old Town Park Local Nature Reserve. As the path emerges at a grassy area, walk past the bridge, along the boardwalk to your right and through the gate. To visit Okehampton Castles (owned and managed by English Heritage), cross the footbridge, stile and car park, and turn left at the road. The Castle entrance is 100m to your left. The Castle was established within a few years of the Norman Conquest. Strategically situated in the middle of Devon, it provided a symbol of power of the nobility over the local population. However, it is thought the castle has never been besieged or involved in any open warfare.

15. After leaving Old Town Park through the gate, follow the riverside path. At its end, keep straight ahead onto Castle Road.

16. At the end of Castle Road, you can turn left to visit the town centre, or turn right to continue along the walking route. Continue past Station Road, then bear right into Simmons Park.

17. The park was given to the town by local man Sydney Simmons in 1907. Note the Swiss-style Chalet Treloar, named after the Lord Mayor of London who conducted the opening.

18. Keep to the main path alongside the East Okement River. At the end, climb the steps back to the right then turn left up the steps at the junction. Keep climbing to the top then continue up the path ahead to the road.

19. Turn left to the station, forking right under the bridge to the starting point. 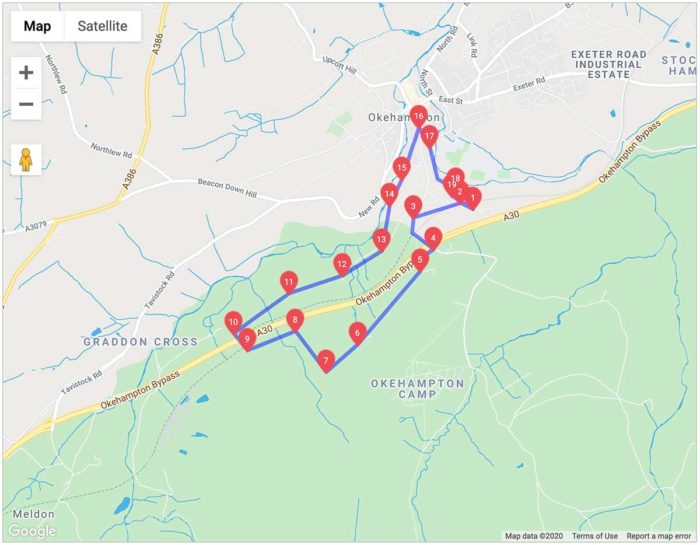